Posted in On the Way
Tomas On the Way No Comments
September 17, 2015 Tomas 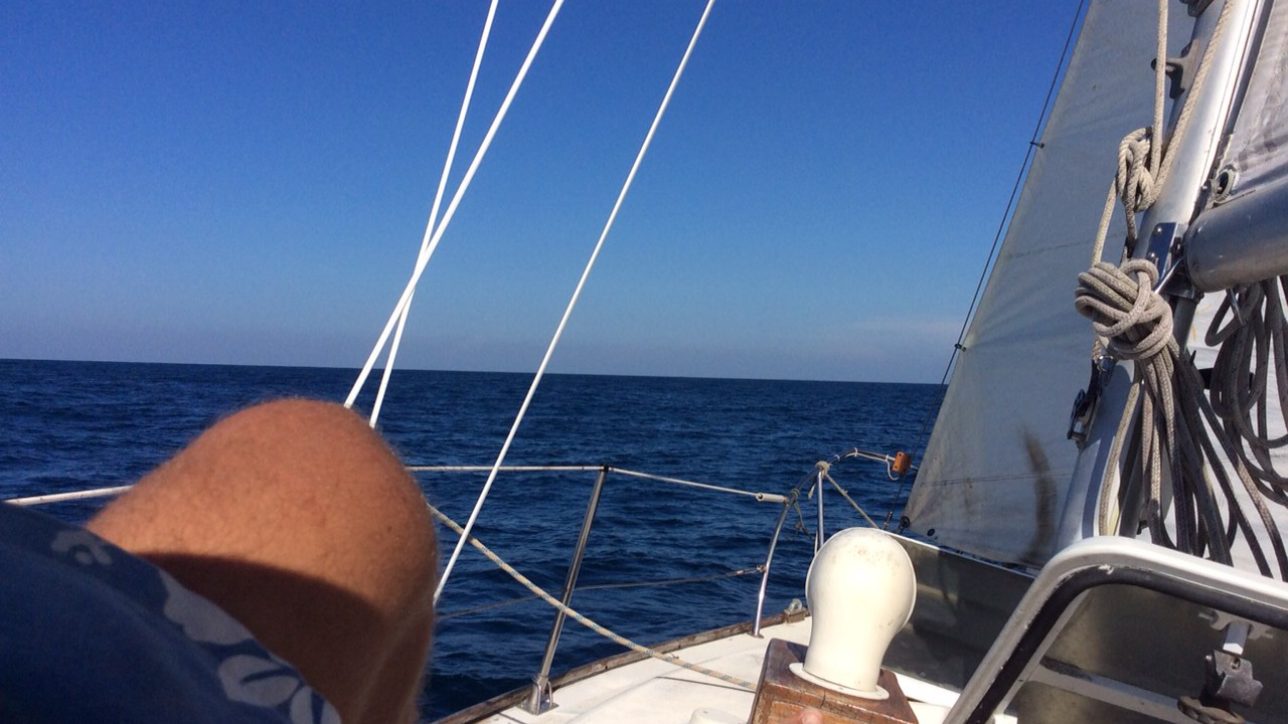 After a year spent in Rio Dulce in Guatemala time to leave has come finally as both my visa and cruising permit were about to expire and Magico also couldn’t have been more ready. Magico got a new bimini above the cockpit which turned out be quite essential think for sailing under tropical sun during the trial trip in Belize few months ago (the one I still not have written about on my blog …). The lift for Kenny (the dinghy) above the stern was also finished, while wind generator is still not in place as I need one more aluminium tube.

On monday I moved to Kayo Kemado to say adios to some amigos living there and on wednesday afternoon me, Marina and Mauro (russian-argentinian couple/crew) made it to Livingston where we spent the night. The next day early in the morning, when the tide level is the highest, we crossed the sand bar in the mounth of the river Rio Dulce and set off for Sapodilla, couple of low keys 35 miles north from Livingston which belog to Belize (however check in is not necessary). There we entered the reef surrounding the keys through narrow gap, suddenly all the sea swell was gone and we entered quite anchorage behind Hunting Cay (there are two buoys and about 7ft of water).

The next day we set the course for Utila, some 100 miles, supposedly against the wind. The first few hours there was no wind and we had to motor but in the afternoon we got quite favorable breeze on the beam and were sailing under full main and large genoa towards Utila. Autopilot was steering right and it was very pleasant par of the trip which was about to change very soon. During the late afternoon the wind gradually stenghtened and we changed genoa for working jib. The wind also started to blow from the nose, from the west where Utila lies. Step by step I put first, second and third reef in the main and our course was 30° (Utila and wind was 90°), still good more or less. However, over time weaves built up and we could not steer better course then due north. Our speed over ground was between 5-6 knots, under 3 times reefed main and small jib not bad at all. We tried for couple of hours but finally around midnight I gave up because if we had kept this course it would have meant we would have to spend one more night on the sea, instead the planned one. So we cranked on the engine and were hand- steering till the morning against the waeves and wind.

The thing is that since the moment we left Livingston very stange sound developed when starting the engine and with every start it was worse. In the morning I stopped the engine but didn’t find anything strange. For a while we were discussing the return back to Guatemala as Marina was quite tired and for Mauro it was the first sailing experience. Anyway, while still discussing I set the course again for Utila and in the late afternoon we made it to the anchorage in Utila town.

We grabbed some food, have a beer and while later I went on to sleep, while my crew went to have more beer and play pool. The next day I revised the engine again and found two bolts on the starting engine loose. I screwed them again and weired sound seems to disapper, though I think not completely. Water pump developed a leak, although it was rebuilt few months ago. So I have to fix somehow those two things issues – it will be more complicated here as Utila is small island, not like Rio Dulce where you can fix more or less everything, if you are patient enough. Anyway, I could make it back quite easily as it would be probably nice downwind trip if I decided so. The third issue is the main sail which is old and now I see lots of small holes in it, especially in the top part. I would need a new one but can’t afford it at the moment. Just in case i carry spar main sail which was cut for smaller boat but would work as reefed one in case of emergency. So it’s not so bad, it just doesn’t give a complete piece of mind.

So now I’m exploring Utila, tied up to a small dock because I like easy access to the shore. Utila is famous for diving and I wonder if could get a job as a dive master for a while, as I was plannig a year ago before I bought Magico. In one diving shop I saw announcement calling for dive masters so I went in to ask more about it. The problem seems to be my certification – I have dive master license in CMAS but all the dive centers here work under PADI system. It didn’t matter that I have about 80 dives, nitrox certification and IANTD oxygen provider course, apart from the fact it takes more effort to get CMAS then PADI license. But I’m still not giving up, let’s see what will tell me in other dive centers.

It was quite strange feeling leaving Guatemala, I spent a lot of time there and although Rio Dulce is rather boring place I have already couple of friends there. In Sundog I knew everybody and they knew me while here in Utila I’m starting again from scratch. I don’t know, perhaps I’m starting to appreciate relationships with poeple which last long rather then discovering new places as anonymous person. Magico is still for sale so I will see if could sell it. I have got couple of offers but nothing serious. I’m thinking also that I could keep it and charter (sort of) it to friends who would like to get some cruising experience in Carribean (i.e. to experience some troubles with sailboat :).

My plan now is to spend a month or so here in Bay Islands, then move to Belize and in november move to Mexico to meet my brother with his girlfriend coming to Cancun. Let’s see how it goes, from september to november is the period with the highest risk of hurricanes in this part of Carribean.